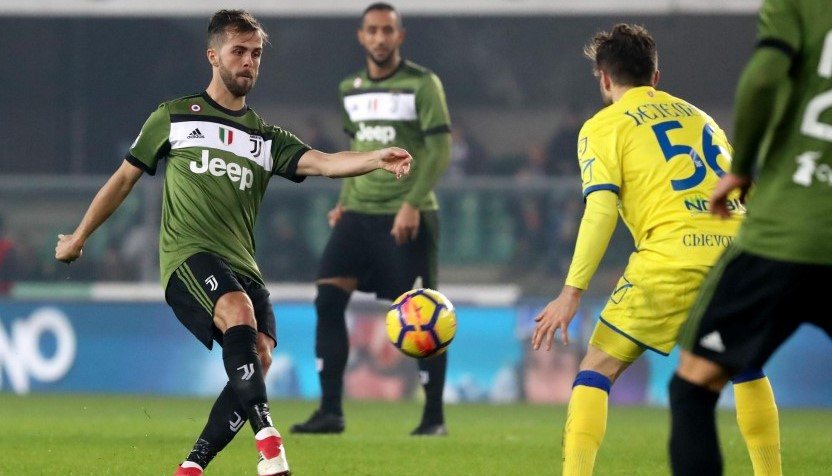 The new season is almost starting! This means that the team at Mr BigWin is again constantly busy analysing all the upcoming match fixtures for the Italian League. Like every year we will start off this football and betting season with our free Serie A week 1 predictions. For this week we included an analysis of every single match, as well as free high-value betting tips.

Our Serie A predictions kick off in a less traditional fashion, with current champions Juventus playing their first game of the season away from home at the Bentegodi in Verona. Juventus is a Serie A powerhouse and after winning 7 straight they have added none other than Cristiano Ronaldo, arguably the world’s best player. In addition to that, they have strengthened their squad at each position of potential weakness since last season. Juventus will dominate again in Serie A, and this game will be a show of power after a summer full of expectations and excitement for the Juve fans. Their starting 11 looks formidable and looks to be at full strength to start the season.

Chievo had a fairly quiet summer in terms of transfers. There was an issue with the Lega regarding financial statements and valuation of assets that may have seen Chievo penalised but they have been give the all-clear to start as normal and what a debut it is for them in this campaign. Chievo signed Nenad Tomovic (defender) from Fiorentina and Mariusz Stepinski from Nantes in a bid to remain in Serie A this season but it will not be enough against giants Juventus. The value in this one is a Serie A Asian handicap on the final outcome of the game and some good odds on the Juventus win by 2 or more goals.

Opening day with a bang for both these teams in the best fixture of this first week in Serie A. New beginnings for Napoli as they start their 2018/19 campaign away to Lazio. A really tough fixture to start with after an equally tough summer of ups and downs for Napoli. The ups in the form of replacing manager Sarri (to Chelsea) with world class manager Carlo Ancellotti. The latter returns to Serie A after an absence of 10 years with stints at Chelsea, Real Madrid and Bayern Munich, in which he has had a high level of success. Ancelotti now returns to a Napoli team that has had a very tepid transfer market.

With the departure of Jorginho to Chelsea and the signing of Ruiz from Benfica, Napoli has made no major moves. What they do get though is a newly motivated Marek Hamsik and the recently recovered Milik (knee injury). Napoli president Aurelio De Laurentis has spent the last few weeks cooling fan’s expectations (who have in turn called for his head) and has not committed to his usual stellar summer signing. His argument is that Ancelotti is the new star signing, the fans obviously disagree.

On the other hand, Lazio have also had a slight drop off with no star signings but have also managed a decent addition on the wings with Correa from Sevilla and solidified themselves defensively with Acerbi from Sassuolo. They’ve however lost a decent package of DeVrij on a free transfer (Inter), Felipe Anderson sold to West Ham for EUR38m and are battling with keeping Milinkovic Savic, their star player from last season.

This one will be intense with both sides looking to keep up with Juventus from day 1. Either of these teams will definitely not settle for a draw, knowing that Juve will surely beat Chievo and get 3 points. Expect cards in this one.

Torino vs AS Roma

It’s the first day but along with the Lazio vs Napoli game this weekend has another great match in store with Torino and Roma clashing on the Sunday evening fixture. A quiet off-season for Torino with their star striker Bellotti coming back from injury and with Roma having gone through a good transfer market overall. They sold their promising keeper Allison Becker for a whopping EUR 75m to Liverpool and their warrior midfielder and fan favourite Radja Naingolan to Inter for a measly EUR 36m including Davide Santon. They do get a great attacking midfielder in Pastore who is experienced in Serie A and had a good stint with PSG in France. The fans are really excited to see young talent Justin Kluivert, son of legendary Ajax, Milan, and Barca, Patrick Kluivert. He is the one they want to see in action.

Torino have made Niang a permanent signing and have also wrapped up the services of Meite from Monaco. They were impressive at times last season but as usual they suffer from complacency and have at times been frustrating to watch. They are as exciting as they are shockingly poor at times and hopefully, they can be consistent this season and attempt a longshot placing for the Europa League. Roma on the other hand want to consider themselves as contenders and rightly so. This match will have many goals and Roma will score more than Torino. It’s going to be a tough tackling fixture with both teams wanting to assert their position on the pitch.

Could it have been a more eventful summer for AC Milan? Out of Europe by UEFA decision, back in through appeal, change of ownership structure, change in top management at Club level, sale of their captain back to Juventus and a super signing in the form of prolific striker Gonzalo Higuain. Wow. The thing is, it’s probably not done yet. At the time of writing, Milan are also in the hunt for another star player to add to their squad.

The hope for Milan this year is to try to break back into the top four and guarantee a place in the Champions League again next season. This year though will be tough. They will most likely play a lot of games on Thursday and Sunday, not exactly the best combination but they’ll have to tough it out. Milan also replace Bonucci with young promising Mattia Caldara from Juventus and 2nd goalkeeper Pepe Reina from Napoli. Genoa on the other hand replace their keeper Perin (Juventus) with Marchetti from Lazio and they have added Lapadula from Milan. This will be a tough season for Genoa as they are neither here nor there in their aspirations and staying away from relegation will be their primary target.

Inter are considered to be almost sure of a top four placing this season. Their only difficulty this season is dealing with additional Champions league fixtures that will be tough due to their 4th category placing in the draws. They will have a tough group to deal with but seem to be well equipped so mixed feelings there. Inter added a very decent set of players and are being linked to one of the best players in the world that is Luka Modric. Look out for the Neroazzuri this season as they are all out to impress.

Lowly Sassuolo have more humble ambitions and are looking to remain in a decent mid-table position this season comfortable off the relegation battle. Signing Babacar from Fiorentina after a loan spell last season and Odegard from Inter, Sassuolo will be looking to limit the damage in this one. Spalletti will be happily juggling his star-studded midfield this season with Croatian players coming off a very successful World Cup campaign. They also have a very promising youngster in Lautaro Martinez. The young Argentinian has impressed during the summer friendlies showing incredible poise and a deadly attitude infront of goal.

Relegation battle day 1 between these two teams. Every point against their direct opponents will be crucial if both these teams want to stay in the top flight next season. The magic number is 40 points and quite frankly we think that Bologna will have to really put in their 110% every game to stay in Serie A. They’ve had a few lucky misses in recent years and the club does not look like it may hold on for much longer. They struggle to attract players and their consistency has been average at best.

Classic draw game predicted here for a newly promoted Empoli side back in Serie A after an absence of only 1 year, however they have been going to and from with Serie A and Serie B for almost 8 years now. They’ve sold their “star” player Saponara to Fiorentina and have replaced him with Palermo player La Gumina. Tough for us to see them being consistent with this squad. The competition is fierce and not much hope lies in this one for them. The vistors from Sardegna have a good season to look forward to with signings of experienced players Lucas Castro, Darijo Srna and Filip Bradaric. They’ve managed to hang in there for 3 straight seasons now and we think they will stay up this time too (just about). This one won’t be exciting for the neutral and will almost certainly end in a draw.

After an absence of 3 years, Parma are back in Serie A after an impressive 3-year 3 promotion sequence. Relegated to the 4th division in Italy after being declared bankrupt and changing ownership, Parma are back in top flight football. They do however start with a point deduction in light of suspicious activity by their captain in the final matches of their Serie B campaign last season. Parma are a well followed club and have had their fair share of battles over the years from the glory days in Europe to the lows of bankruptcy and fraud. They are back now and they have made a few exciting signings this summer. Latest rumours have them linked to Italy striker Mario Balotelli and that would be a great addition to their squad. The hope for Parma this season is to stay in Serie A and continue to build in future years. They start their campaign at home against Udinese. The latter are coming off a disappointing season that saw managerial changes and some key matches that failed to impress. They really need to get off to a good start and this fixture looks like the classic draw.

An exciting start to the fixtures for both these teams. We’d consider these as firm favourites to stay put in mid-table but they can both offer some fun football games throughout the season. Sampdoria add Duvan Zapata to their ranks and this should provide a boost to them whilst Fiorentina finally come to grips with losing their captain in a death that shocked the world of football last season, by adding Saponara from Empoli. The ownership have always managed to field a good Tuscan side that brings exciting football. Chiesa has stayed on and they have also added a solid centre back in the form of Argentinian Pezzella. The Luigi Ferraris will be bustling next Sunday and this fixture has gone over 2.5 goals in 3 of the last 5 in this stadium and 5 out of the last 5 overall.

Atalanta are one of our favourite teams this year. Favourites to perhaps break that Europa League group stage curse and get to the elimination rounds. They have performed incredibly well in the qualifying rounds with overwhelming wins in their first competitive matches. They will also look at not getting too distracted by their Thursday/Sunday fixtures as are Milan. They will enjoy the cash injection that Europa League presents and will use that to further strengthen their squad. They have managed to sign Cristante permanently back from Benfica and they keep a squad almost intact from last season. Newly promoted Frosinone will find life in Serie A extremely tough. This is only their second ever stint in the top tier. Back in 2015-16 they we relegated after 1 year in the top flight and this season have managed to get back in after a successful Serie B campaign. Realistically, they will be back there very soon.