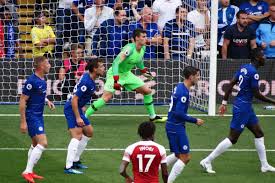 With the Premier League 2019/20 season just around the corner, we thought we’d give you our insight into how we see things panning out. Who will be the winners? Will it be Manchester City for the third season in a row or will we see a different club edge it? This is what our expert EPL Predictions tipsters see happening. You can also follow all tables and stats on the official English Premier League website. Now for our previews below:

Manchester City – 1/2
Although Manchester City are odds on to win it for the third season in a row, we can’t see them getting beat to it. They are going from strength to strength. Having the fighting spirit to edge it from Liverpool last season after trailing for much of the season shows they are just as mentally strong as they are physical.

Yes, we think Manchester City are going to win it. If you’re looking for a bit of value however, then we would suggest looking in the direction of Liverpool. They are priced at 2/1 and pushed City right until the end last season. Although we think they may come up just short again, there is no reason why they cannot edge it.

The Premier League is one of the most competitive leagues in the world and it is becoming harder and harder to call which teams are going to go down. The sides coming up from the Championship spending big money makes them compete a lot more than they used to. We think a lot of sides will struggle this season with the top six all looking so strong. This makes it a hard one to call, but here are the three sides we think will end up facing the drop.

Norwich – 1/1 | Norwich were promoted to the Premier League last season. With the club not spending much this summer, we think the same side could struggle to compete in a league with a lot more quality.

Sheffield United – 8/11 | Sheffield United were also promoted last season but for the same reasons as Norwich, we think they could end up straight back in the Championship.

Brighton – 2/1 | A slightly bigger call this one. Brighton only just staying up last season and looking very poor towards the back end of the season, we think they could find themselves back in the Championship after a good stay in the Premier League.

The Premier League teams to watch this season

Aston Villa | Aston Villa were the third side to be promoted last season and have since spent a lot of money to improve the squad to compete in the Premier League. The Birmingham side are a huge club and will feel they are back to where they should be. We think they will have a solid season and finish around mid-table.

Southampton | Southampton have struggled for a couple of seasons now. Since Ralph Hassenhuttl took over last season, they have improved massively and secured some huge wins against the bigger sides in the league. They will not be pushing for European sports like a few years ago, we expect a big improvement from the last couple of years.